Hiking Backpacking and Loving the Outdoors

Our first day of travel in Scotland saw us visiting battlefields, monuments and castles. There is so much history here. I really don’t know how anyone can keep track of who fought which battle during what year. People have lived in Scotland for over 12,000 years, but her written history dates back only to the 1100s. I do know this much – the Scots love Robert the Bruce and William Wallace.

After picking up our car in Glasgow, we headed 30 miles north to the city of Stirling.

Geographically, this is where the Scottish highlands meet the lowlands. Ancient artifacts and bones found in the area have been carbon dated back to the Bronze Age.

Upon arriving in Stirling, our first stop was the site of the Battle of Bannockburn. During a two day battle in June of 1314, Robert the Bruce, King of Scots, squared off against Edward II of England in a battle over Stirling Castle. After the 2 day battle, the English broke formation and the Scots were victorious in occupying the castle.

Larger than life, Robert the Bruce 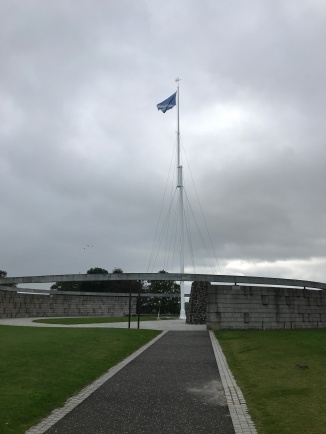 Monument to Robert the Bruce

Our next stop, was across the city to the National Wallace Monument built in 1869. This is where, in 1297, William Wallace, Andrew de Moray and their troops defeated the powerful English at the Battle of Stirling Bridge – think Braveheart. We toured the visitor center, drank decadent hot chocolate and walked the footpath up the hill to the monument.

Once there, we climbed the spiral stone staircase to the Hall of Arms level. The next level was the Hall of Heroes which housed 15 white marble and one bronze bust of Scotland’s most notable figures. The centerpiece of this exhibit was the Wallace Sword, said to have been used by William Wallace himself in 1297. Our tour guide was a former police investigator who has a couple of personal ties to sword. I teared up listening to his passionate account of Scottish history. 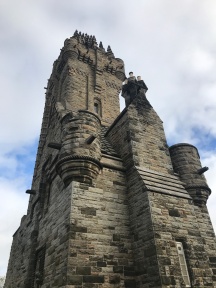 Hall of Heroes and the Wallace Sword

If you are familiar with the movie Braveheart, you know how William Wallace met his demise.  Each time I watch the movie, I get ripped up at how cruel his death was – shame on you, Hollywood, for making his execution worse than it really was!! After visiting the monument, I now believe Hollywood actually softened the blow for us.

After walking down the paths of the monument, we drove back across Stirling to the Stirling Castle. (Have I ever mentioned about roundabouts being the spawn of the devil?) The city of Stirling was once the capital of Scotland and is home to Stirling Castle. Ancient ruins can be dated as far back as the 12th century. The structures now in place were built between 1490 and 1600. The castle has seen 8 sieges with the last one being in 1746.

For more than 600 years, notable writers have linked Stirling Castle to the legend of King Arthur. Recent research has revealed The Round Table may have been hidden below the castle.

Recently, nine graves were discovered under a chapel built in the 1600s. Two skeletons, one male and one female, apparently met violent deaths in the 1300s. It was interesting to view the exhibit and see the research on how they came to conclusions regarding the individuals.

The history of the castle is overwhelming, so buying books to read later is a must. There was so much more to Stirling, but unfortunately, we needed to hook it to Pitlochry 60 miles away and check into our inn before nightfall.

*Estimating time of arrival in Scotland is quite different than in Meeker. You have a lot of these to contend with….